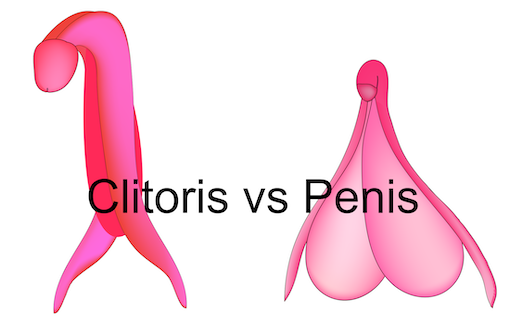 I am so excited to share the first-ever dissected clitoral structure with you. I’ve been waiting for years to see pictures of what the clitoris looks like. And recent research to locate the clitoral nerves shows us much more than we’ve ever seen.

Warning: If you’re squeamish about seeing dissections of human bodies, this may not be for you. I like looking at actual images of body parts because illustrations cannot convey the dimensionality and humanity of the actual pictures. It looks pretty to me. But I’ll warn you before getting to that part of this article.

First, let’s start with the image I had custom designed of the clitoral structure to orient you. This diagram shows the three erectile tissue bodies in the female genital system:

The clitoral system includes the glans (tip), the shaft, the arms (crura), and the legs (vestibular bulbs).

The urethral system, often called the G-Spot, is not a spot; it’s a long tube of erectile tissue surrounding the urethra — the tube that runs from the bladder to the vestibule where a woman’s urine and female ejaculate exits the body.

The perineal sponge, located between the lower vaginal wall and rectum, is not well-researched anatomically. However, if you dissected all three erectile systems and placed them in your hand, they would fill up your palm.

These three structures are comparable to the male erectile tissue system, comprised of two corpus cavernosum and one corpus spongiosum.

Women have the same amount of erectile tissue in their vulva as men do in their penis. Yet nobody’s talking about women’s erectile dysfunction or women’s loss of sensation due to atrophy from aging, illness, and menopause. In time, the world will understand that blood flow to the pelvis is as essential for female bodies as it is for male bodies.

And one more important point before I show you the clitoris in all its beefy glory. Because our erectile tissue is tucked inside our bodies, it takes longer to engorge or fill with blood than our male-bodied partners. Men have three significant competitive advantages sexually that have impacted women’s pleasure.

I am delighted to have these actual images of the clitoral body because when people see this tissue, they only stop thinking about the clitoris as the tip or glans. That’s the part you can see sticking out of the body.

People think that is all there is to the clitoris and the penis is much bigger.

Now that they can see that this tissue can fill the palm, I hope lovers will begin spending more time helping her get her clitoral erection before proceeding with intercourse.

It takes her 20 – 30 minutes for these three erectile tissue systems to begin filling with blood. When partners focus on intercourse as “the sex act,” and the woman doesn’t get enough internal and external stimulation to her erectile tissue before penetration, intercourse is not as pleasurable. She struggles to climax. And over time, she wants less and less intercourse.

When couples team together to focus on the engorgement of her vulva, giving her the time and attention it takes to become erect inside, then there is more surface area sending more pleasure signals to the brain. This increase in sensation helps her finally orgasm from intercourse.

Orgasming from intercourse is a learned skill. It doesn’t require even touching the tip of the clitoris. If engorgement is thorough, the erectile system is wrapped around her vagina and gets all the stimulation it needs from penetration. Additional clitoral glans stimulation is the frosting on the cake.

Women who have one orgasm and get too sensitive are focused on overdriving at the tip of the clitoris and are not getting enough stimulation through manual, oral, and vibrators to fully engorge their clitoral, urethral, and perineal tissues.

The bottom line is that what we consider foreplay is part of having sex, and intercourse is just one part of the sex act, not THE sex act.

Reframing the approach to vulva stimulation and engorgement — taking the time the female body needs to reach a high state of arousal — will go a long way in helping women achieve sexual satisfaction.

Now let’s look at the clitoris.

Notice how the shaft, tip, arms, and legs wrap around the vaginal canal. Notice how the clitoral shaft goes up from the tip (glans) under the hood and into the space between the pubic bones. You can feel the shaft engorge and start sticking up when it gets an erection. It has a suspensory ligament like a penis to hold the clitoral erection up. Have you felt yourself or your partner get a clit boner? The clitoris is not fully engorged until you feel the shaft pop out and get erect.

Now, look at the bulb of the vestibule. There are two. They look like little punching bags. Those can be felt if you press the pubic hair on each side of the opening (vestibule) where her urethral orifice (where the pee comes out) and vaginal opening (introitus) are located. The arms, or crura, go back a bit into the body. You can feel the ascending segment of the clitoral body, which is the shoulders of the arms when you slide your finger into the notch between the inner and outer labia. They are attached to the shaft of the clitoris.

Here are the pictures of the dissected clitoral structures. Nothing to be put off by. They are just parts of our fantastic anatomy. In the colored photo, you can see the clitoral shaft and glans at the bottom of the picture. The crura (arms) come off of the shaft. The vestibules are the plump things with the letter C. Look how much tissue that is! That is ALL erectile tissue except for the glans, which is smooth muscle tissue.

Isn’t that incredible!?! The average length of the structure based on a median measurement from 10 dissected clitoral bodies runs 1 1/2-2” (38-50mm) long. The one in this picture is over an inch wide, roughly 3cm.

This tissue relies on good blood flow to the pelvis to become tumescent (erect). The winning triad for stimulating the erectile tissue in a woman’s body is to:

The blood from arousing this tissue stimulates lubrication of the vagina. The vagina needs fluid from blood plasma to wet the canal. It isn’t self-lubricating.

All the stimulation of kissing, breast and nipple pleasuring, vulva massage, oral stimulation, and vibration from sex toys gets her to the point where she is lubricated and ready to be penetrated. When she is prepared, applying the various intercourse thrusting, grinding, and palpation techniques I outline in my Making Whoopee 3.0 articles will help her achieve orgasms from intercourse.

Practice makes perfect. Now you know what the clitoris looks like, where the parts are located, and how to approach engorgement.

From now on, you can give your woman time, or if you’re the woman, take the time to allow your body to reach peak arousal before penetration. This will help you begin to have orgasms from intercourse. Then you can practice lengthening your orgasmic peaks such that you are coming for longer and longer periods. As you get better at engorging your genitals, you can experience even more heightened orgasmic sensations. The idea of having longer, stronger orgasms is behind the Expanded Orgasm practice.

Start paying attention when her clitoris gets a hard-on. Over time, she will engorge more efficiently and more quickly. But remember, slow is the way to ecstasy.

I await your comments and questions. I’m particularly interested in what you found most interesting about this information and what bedroom habits you will change now that you know these things.

I am sending you much love today. I appreciate you!

Anatomical Dissection of the Dorsal Nerve of the Clitoris

Anatomy of the Clitoris, Journal of Urology