What Should You Do When She Pushes You Away 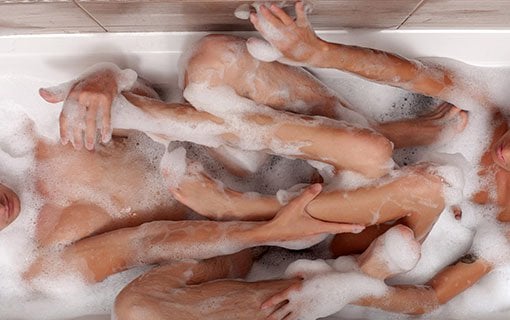 I recently received an email from a father of four who’s been married for 13 years. Learn more about relationship values.

Jack and his wife stopped having sex after their fourth child was born. He feared their sexual “dry spell” would never end. To make matters worse, she wouldn’t even kiss him anymore. She said it grossed her out.

Several issues are at play as often when a couple’s intimate life dries up.

As is true with many relationships, the problems were made worse by a lack of communication.

For Jack and his wife, communication was vital in resolving their issues.

Jack’s the guy who hates fighting with his wife and tends to avoid talking about the hard stuff. But once I helped him see the connection between his frustration and the difference in their relationship values, he was able to work up the nerve to speak with his wife.

Jack’s top four relationship values are his passionate connection with his partner. For him, marriage meant making love throughout their lives, even into old age. He needed to clarify that he didn’t sign up for a sexless marriage.

“I feel alone,” he told his wife, allowing himself to be vulnerable.

Initially, she got defensive, “So… if we don’t have sex anymore, you will divorce me?”

He assured her that was not what he meant, that he’d married her for better or worse. But he didn’t leave it there.

He wanted her to understand that he considered sex part of their deal as man and wife, just like having a family. “How would you have felt if I had refused to have kids?”

His wife replied, “That’s not the same.”

He said, “Isn’t it? You came into this marriage under the agreement that we would have children. If I broke that promise, how would you feel?”

That made her think.

Like so many couples, these two had never clarified their individual “why” for being in a relationship. They’d never identified the bottom-line, must-have relationship values that made them want to couple up in the first place.

What’s truly unique about relationship values is how little couples talk about them!

What makes for a happy coupling-up is when each individual gets satisfaction from their essential, non-negotiable values.

To do that requires a two-step process:

Each of you identifies your values independently of the other. This step includes stating the exact actions that would satisfy that value. For example, if you value affection, double down and say precisely what that looks like.

I want to hold hands in public. Please touch me whenever we’re close. Please come up behind me in the kitchen and keep me while chopping vegetables.

When two people have this crucial intel on each other, everything changes.

The second step is agreeing to satisfy your lover’s values as the foundation of your relationship. In other words, now that you know what your lover values most about being in a relationship, you decide, “Yes, I can give you that.”

It was the turning point for my husband and me when our marriage was in serious trouble.

That’s why I wrote Relationship Magic. This little workbook has helped thousands of couples align their relationship values and turn their love life around.

Now let’s look at the second issue for these two: the painful intercourse problem.

Again, part of the problem for Jack and his wife was a lack of communication. They both found it challenging to discuss the hard stuff and kept putting off having that critical talk. And in the meantime, they made matters worse by making assumptions about what the other was thinking and feeling.

Those assumptions got blown apart the day Jack’s wife said, “You do all this research about relationships and sex on the Internet. Why don’t you look up how to help me with the pain in my vagina?”

Jack looked her dead in the eye and said, “What makes you think I haven’t?”

The look of surprise on her face told Jack that he’d disarmed her. That blew things open between them. They started to talk about this challenging subject.

He became very tender and reassured her, saying, “I’m not that big of a jerk that I would hurt you for my selfish needs.”

Jack knew his wife had been to the gynecologist but didn’t get any help.

I had advised him to do whatever it took to get her vulva fixed. He needed to start by helping her find a professional who could help her. I explained to him that it might not be a gynecologist, maybe a nurse practitioner. A doula. A midwife.

Once Jack’s wife saw that he was on board with helping her heal, she became open to him playing an active role. That meant giving her healing genital massages to bring blood into her vulva.

I explained it to him this way:

You may have to give her 200 yoni massages before she wants you inside her again. But it will be worth it because she’ll want you for real instead of because she HAS to give you sex out of “duty.”

I said: I swear to you on a stack of Kama Sutras, this WILL work. And give her breast massages while the two of you are watching TV. In time she’ll be like, “OMG, I want my amazing husband to make love to me! Give it to me, baby!”

The cause of his ED was no mystery in Jack’s case. It was a direct result of not feeling wanted or desired by his wife, who he was still madly in love with after 13 years of marriage.

He’d tried hypnosis and meditation to help with the anxiety about his erection problem. That helped him regain some of his self-confidence, but he still worried that he might have difficulty getting a full hard-on.

What it came down to was clearing the air. Jack needed to relax and not feel like he was walking on eggshells whenever he wanted sex.

His attachment style (what psychotherapists call “insecure attachment”) makes it difficult for Jack to be present, much less feel manly, when he is afraid of getting rejected by his wife.

What he described to me was an all-too-common approach-avoidance dance flavored with rejection and blame.

At the slightest invitation from him, she would shut him down with: “All you focus on is sex.”

From Jack’s point of view, that was a complete bunk.

In his words (reading): “There are plenty of times I’m happy to cuddle with her and expect nothing in return. Yes, I think sex is important. It is supposed to bring us closer together! Last night I reached for her, and she threw that in my face again: ‘all you want is sex.’ I told her: Maybe I focus on sex because you spend most of your time pushing me away and trying not to be close to me! It’s hurtful.”

Of course, it hurts. And, understandably, Jack would feel rejected.

It’s a common problem and can be very upsetting for a man. But it can be solved.

The first thing I tell men is: Do not take it personally.

Her hormones are making her brain reject you. It’s NOT her. It’s those damn hormones.

A man must understand that a woman’s libido is linked to her sex hormones. When they’re low, she will often push him away because she fears that if she touches him at all, he’ll want sex.

I have taught thousands of men the best workaround in this situation. The key is to warm her up slowly by making “small offers.”

Note that I said small.

When a guy like Jack makes a hefty offer like, “Hey, honey. Let’s have sex tonight,” he sets himself up for rejection. It is highly likely he will get an immediate “no.”

And that undermines his turn-on because he can’t take another rejection.

But if he waits for her to initiate, the sexual “dry spell” can become a lifestyle—and that’s just plain unacceptable.

Here’s the secret that makes the “small offers” workaround so effective: rather than shrink and wait for his wife to come around… which, let’s face it, may never happen… he steps into his masculine leadership. He makes his wife an enticing offer she can comfortably accept.

A small offer makes it easy for her to say yes.

For example: “Sweetheart, can I get you a glass of wine?”

Or, “Do you want to sit on the couch and tell me about your day?”

Or, “I can rub your neck for you. Would you like that?”

Start small, and you may get a “yes” to both.

From there, make another offer: “Would you like to get in the hot tub with me?”

Suppose you make an offer that’s too much. Back off. And whatever you do, don’t take a “no” personally. That will send her back into her orbit.

Lower the offer and give her various options until she says “yes” again.

The goal is to make the suggestions so small and irresistible that she provides a string of yeses and becomes more and more open sexually.

I discuss this in my book, Sexual Soulmates: the Six Essentials for Connected Sex.

The six essentials are a proven remedy for low libido.

You’ll learn about simple presence, what it is and how to find it…

And I show you exactly how you and your lover can set up a feedback loop that puts you on an upward pleasure spiral that keeps getting better.

I’ve put 15 years and over 50,000 hours of research, practice, teaching, and testing into distilling the simple action steps that make you a better lover.

Let me help you turn your bedroom into a pleasure paradise!

The “small offers” strategy is one of the four keys to seduction from Dr. Patti Taylor’s Seduce Her Tonight program. If you want to know how to run effective seduction menus that move your partner toward more desire for you, then DEFINITELY get the Seduction Trilogy series of audiobooks and ebooks.

The Seduction Trilogy ⇐ Seduction With Integrity Technique For Couples and Sing