THEFT! ?? You Know Something Is Great If It’s Worth Stealing 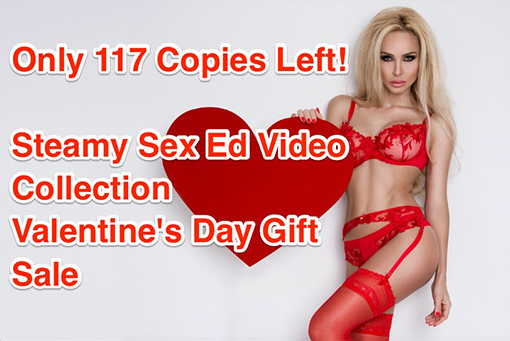 Here’s a very interesting email I got from a guy whose copy of Steamy Sex Ed® Video Collection was STOLEN.

Get Your Copy Now <=== Steamy Valentine’s Day GIFT SALE Closes on the 15th or Sooner When We Run Out Of Copies (Only 117 copies left!)

SEX SO GOOD, IT’S WORTH STEALING

You know something is great if it’s worth stealing.

And like the crook in this story, he knew the Steamy Sex Ed® Video Collection was valuable.

Let’s cut him some slack.

Maybe his (I’m assuming the thief’s a guy, but who knows?) sex life was down in the dumps. His wife/girlfriend was probably sick and tired of him, almost on the verge of leaving, and he needed to pay bills and debts.

That’s probably the reason he turned to a life of crime.

When he saw Steamy Sex Ed®, he probably thought he needed something to spice up his sex life, and getting money and jewelry wasn’t enough.

Well, I still hope justice gets served and the thief gets thrown in the slammer.

As for the guy who sent the email to me, I’ll be reaching out to him regarding his concern to make sure he and his wife are taken care of.

Now as for you, Pussycat…

You don’t have to turn to a life of crime and steal someone else’s copy of Steamy Sex Ed® because right now, it’s ON SALE at less than half of its original price.

And THAT alone is a steal. Meow!

HURRY! Lock in your order while we still have them available on hand.

Sale ends on the 15th or sooner when we run out of copies.

You can, however, immediately avail of a digital download version (they don’t run out). Still, you need to move fast because the SALE PRICE will go back up to full on the 15th or sooner.

Make sure to get a copy <=== Have Steamy Sex Ed® As Your Valentine’s Gift To Your Lover (Only 117 copies left!)

And when your Steamy Sex Ed® DVDs arrive, lock the doors, close the windows and turn down the lights.

Not because crooks are out there looking for Steamy Sex Ed® DVDs, but because you’re about to have some wonderfully-amazing, steamy, passionate, heart-connected sex.

Or just leave them all open so the neighbors can hear you and get super jealous. Hee hee!

Steamy Sex Ed® is ALMOST sold out! We only have 117 copies left. Quick! Lock in your order right here…