Having Lots Of Casual Sex After Divorce

Use this technique with EXTREME caution.

Jessie got his ex-wife pregnant on their very first date.

They decided to get married and have the child. Ten years later, he felt trapped in a marriage he never wanted. He’d never been able to get it up for his wife and had missed out on a decade of his sexual prime.

So when he got divorced, the last thing he wanted was a monogamous girlfriend.

What he DID want was HOT, PASSIONATE SEX ― with as many women as he desired.

He wanted a woman who could just let go and let herself get totally satisfied.

JESSIE WANTED TO SLEEP AROUND

He wanted to leave her with a smile on her face, weak-in-the-knees from having a ton of orgasms.

But Jessie couldn’t figure out how to get passionate sex with one-night stands. The girls would hold back. A lot of them had a hard time coming.

He was also a little “rusty” in the sack. And, truth be told, Jessie had performance anxiety.

So he asked me for help.

As a highly trusted hot sex advisor, I’ve helped guys like Jessie all over the world to become the best lover a woman has ever had.

Performance anxiety is the #1 issue most guys struggle with at some time during their sex lives.

What makes it worse, is that performance anxiety is also the hardest issue to talk about.

When Jessie started using the technique I’m giving you in this free ebook, his sex life was suddenly off-the-hook because:

✔︎ His lovers started to completely surrender to their sexual pleasure.

What’s described in this short book — The Sexual Soulmate Pact — is one of the keys to an infinitely passionate sex life.

Right now you can get a fully detailed explanation (more than I can give you in this email) by downloading my new ebook, “The Sexual Soulmate Pact.”

So if you want to have the kind of sex with women where they surrender to their passion, definitely download a free copy of The Sexual Soulmate Pact.

By the way, this works GREAT on wives and girlfriends too… not just booty calls and hook ups.

Jessie had sex with nine women the first year he was divorced. Six of the nine were so hot for him, he could call them anytime and they’d come right over.

The Sexual Soulmate Pact gives him the ability to have raw, animalistic sex with any lover he wants, and unleash that inner nympho hiding inside every woman.

Women’s sexual desires are way more ravenous and unquenchable compared to a man’s… that is, if it’s unleashed and unshackled.

The Sexual Soulmate Pact does a few things.

It gives you the one key masculine sexual leadership skill that unleashes her inner sexual animal so you can have raw, wild, unhindered lovemaking. The kind she’s been craving all this time, but just can’t find it in herself to explain how to do to her.

It also gives you a two-word phrase that empowers you and your lover/s to continuously have hotter and hotter sex every time you make love. This is possible because you’ll both have no more inhibitions with regard to asking your lover what you want in bed. And your lover will have no qualms about giving in to your carnal desires.

She doesn’t want to just get fucked, she wants soul-connected sex. What’s ironic is: she doesn’t even know what that means, but she knows when she’s not getting it.

What I told Jessie was so simple and straight-forward, it blew his mind. I taught him exactly how to play off a woman’s responses moment-to-moment, as they unfold.

Jessie realized that if he came to a sex date with a strategy or tried to run a tried-and-true pattern, he would miss the opportunity to play off her sexual responses and lead her deeper and deeper into her pleasure.

One of the things that really surprised Jessie once he started using the Sexual Soulmate Pact was that women want a wide variety of sexual stimulation.

Some want soft and light touch.

Some want to be devoured.

Others want their clitoris stroked really hard while having their nipples sucked.

Even more surprising was that the type of stimulation a woman wants can change from day to day, even from moment to moment.

The Sexual Soulmate Pact lets you know her innermost desires in the moment, so you know you’re doing it right.

In short, once Jessie discovered how to actually let sex happen, he immediately became an infinitely better lover. And his performance anxiety was a thing of the past.

In the end, he got what he wanted (passionate sex) because he brought so much more into the bedroom than “game.”

“I could see myself doing these things.” — William

By the way, Jessie is not unusual in wanting connected sex. People think all men are unemotional Neanderthals who just want to get off. If you love it when women surrender sexually and crave incredibly passionate connections with women, you are not alone.

When you learn to go with the flow and stop being goal-orientated, women will start responding to your touch in amazing ways.

Be forewarned: the technique described inside this free book is so provocative to women that you MUST use it with extreme caution…

Unless you want girls to fall head-over-heels in love with you the first time you sleep with them.

Get hot steamy sex with lots of women? Use this: 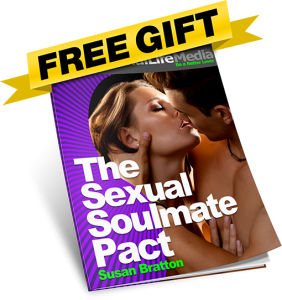 And because it gives women the kind of attention and appreciation they’re dying to get from a man without all the high-maintenance, you have to be really clear with every girl you have sex with that you are non-monogamous…

Otherwise, she will immediately think of you as her boyfriend. Even her soulmate.

Give women the kind of attention and appreciation they’re dying to get. Be a man with high sexual value. Give her that earth-shaking, bed frame-breaking flash of Passion.