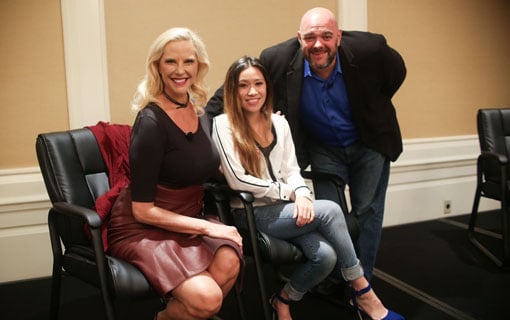 I was recently a featured speaker on a panel about Digital Sex and thought I’d share my insights with you as they are definitely impacting your sex life in ways you may not even be aware of.

How Sex and Sexuality Has Changed Because of Digital

People are having more sex with more partners than ever in the history of the world. This is a good thing generally because it allows those who are to learn more about themselves and others as sexual beings. More partners can create more sexual confidence and a wider set of experiences to find those things that are the biggest turn on for a person. Women today are much more sexually open and positive about having multiple partners which increases the potential for more great sex to be had.

Just look at all the sex toys available at Amazon.com now. Women and men are both becoming aware of how to be multi-orgasmic.

And notice the proliferation and mainstreaming of fetishes, kink and genres such as Threesomes and group sex.There’s more experimentation than ever. Younger people are leaning toward “Open” or “Polyamorous” relationships.

Each lover you have teaches you new things you can then in turn teach to others. More joy and love can be created. And there is more information available about the prevention of STD’s and unwanted pregnancies, making safe sex more available to people who seek it.

There are more sexperts available now than ever. Instead of trying to talk to your doctor (who received little to no sexual training) about any sexual issues, you can consult a sexual therapist or relationship coach. And you can have your session over Skype video from the privacy of your own home.

And there are more permutations of sexual identity expanding at a rapid rate. Now with the new genderqueer moniker, more people feel seen and accepted for wherever they fall on the “straight-gay” continuum. Millennials or Generation Y, kids born from the 1980’s through the 2000’s, grew up in the age of dating apps, smartphones and many have been sexually educated by pornography.

What Impact Digital Sex Has On Us As Human Beings

The issue with people learning about sex from pornography is that it’s sensationalized and rendered unnatural for camera angles and titillation. It leaves out the authentic interaction in the moment by moment of lovership. Pornography drives a wedge between intimate connection and humans who seek it.

Sexuality is a low trust environment online. We here at Personal Life Media take great care to engender your trust and to differentiate ourselves from adult by walking the line between where you are in your sexual maturation having only access to adult content and the lightweight “soundbite” snippets from mass market magazines and twisted media perspectives and the line that connects your heart to your sexing.

The low-trust factor —who CAN you trust with your sexuality —is what makes me get on Television dressed up as The Marriage Magician or The Queen of Hearts. Doing TV adds a level of credibility to the brand of Susan Bratton that lets me create more trust with people more quickly.

It’s funny. Almost everyone thinks that they grew up in a repressed household. Their parents didn’t touch each other much. Sex wasn’t talked about. And for most men especially, they feel like they have no one with whom they can speak honestly and openly about sex… not even with their wives. What’s really going on is that almost everyone feels this same way but assumes it’s different for other people.

Even though digital has impacted every aspect of sexuality, it cannot change the primal nature of the man/woman dynamic.

You can see, from the scandal at Ashley Madison — the “cheating” website where tens of millions of men were chatting to fake profiles of women who were really computer bots — that primal behaviors follow us right onto the Internet. Men pursue. Women choose. This is “sperm competition” beautifully illustrated by data results from the hacked Ashley Madison database. Eleven million men were active where less than 2,500 real women replied to requests for a liaison. Without the fake profiles and bots that generated fake replies to the men on Ashley Madison, the company would not have had a business. They made their money when men paid to reply to the “women.”

That’s why men love to learn sexual techniques, where there’s only a very small market for women to learn techniques. They want to learn them when they are trying to “get a guy.” Men need to be ready. So they can know how to give a woman incredible pleasure when she gives the signal that she wants him. If he does a great job, he might get invited back. Having a steady sex partner is so important to a man, he’s willing to overlook some pretty crazy female behavior to lock in a steady supply of sex.

And take Instagram, Tumblr, Periscope — these digital applications are perfect for a woman to show off her beauty through imagery that attracts masculine attention. Where men want to give women incredible pleasure, women want to be adored and found sexually irresistible. The masculine and feminine are biologically perfect together.

One of the best things about all the long-tail niches of adult content is that people realize they are not the only one who loves MILF’s or MFM’s or doing it with clowns or vegetables. It removes the stigma of a particular desire. It’s easier to find your tribe with the algorithms of the Internet. This decreases a lot of sexual shame and normalizes what used to be kinky into simply another sexual genre. People become more accepting of themselves, which helps them find more people like themselves to have the best sex of their lives.

Same with erectile dysfunction. That used to be the domain of the old man. But now men of all ages are struggling with ED as well as premature ejaculation and delayed ejaculation. That’s one of the reasons I partnered with Jim Benson on the Multi-Orgasmic Lover program. Not only does it help men with a natural body-based technique to cure ED, DE and PE, but the “squeeze-breathe-thrust” technique feels incredible to the woman. And it sets men on the path of being multi-orgasmic themselves. And no, that does not mean ejaculating a couple times during sex. It means have non-ejaculatory orgasms that roll through a man’s body until at the end, he has an ejaculatory orgasm.

The Internet is making sex better for men in that they have access to programs like Multi-Orgasmic Lover. Wherein they can learn how to connect their hearts and genitals and to get back to the primal state of lovemaking that women crave.

All in all, digital sex is advancing forward for the better. We are learning. We are finding our turn on, our tribe and our lovers at unprecedented rates.

I encourage you to do the same. Find your turn on. Gain some skills. Open yourself to your pleasure and connection with another. (or a vegetable if that’s what gets you off) 😉